“Build a bridge by extending your hand”
– Ken Poirot

In my last post, I touched on ORSC’s Third Entity as a tool to uncover and address the relationship gaps that can exist in an organization undergoing change. Gaps that include vague reasons for change, lack of vision partnership and a status differential that perpetuates the hierarchical divisions between management, staff and the layers in between. Gaps that can impede, halt and even regress the progress and effectiveness of a system-wide change like moving to agile ways of working. But why do those gaps exist in the first place? Let’s explore what could be underneath those gaps.

The Prevailing State of Management

What’s the current narrative for many of today’s managers?

Let me opine based on my own experience as a former manager. I had always wanted to be a manager. Success in life meant a vertical ascent. The higher the better. My family was proud of what I had accomplished as a manager.
To them, it meant I had power.
I loved all the trappings that came with it. An office with a view. Special pieces of furniture and artwork. An executive assistant to organize my day. And people to manage on behalf of the organization. The reward for doing a good job was more people to manage and a step closer to the hallowed halls of executive power.

The size of my ego was proportional to the span of my control.

Goals, objectives and incentives were aligned with the C-suite and trickled down to my staff. What interested my boss, fascinated me. I managed by the numbers. Make the numbers and all was good. The ends always justified the means. I took pride in being the go-to problem solver because I knew best. Nothing got done without my command and approval. The job came with plenty of challenges but that’s why I had status and got paid the big bucks. At least that’s what I kept telling myself.
Over time the job became less about solving technical problems and more about mediating conflict and bickering amongst people. In a word, I felt Ike a parent at best and a baby-sitter at worst. People across management boundaries were reluctant to solve their problems directly with their counterparts. Preferring instead to go up and down the management chains of command. Effectively putting the monkey on my management back. I became a messenger bearing bad news from my people to my management counterparts. I was fighting their battles for them.
When we made our numbers, I made sure the team got their share of the credit and accolades. When we didn’t make our numbers, it was all on me. I’d love to trust my people to get things done but I was still ultimately being held accountable. I needed to know and control what was going on. I felt like a micro manager.
As the responsibilities increased, I was under more and more stress with the weight of the world on my shoulders. It was a lonely world at the top. I got used to eating lunch alone. I became the single throat to choke. An easy and convenient target when things went wrong. My singular success had become my solitary trap.

My modus operandi was Command and Control.

The Prevailing State of Employees

What’s the current narrative for many of today’s employees?

They’re following the well-worn path set for them by the organization and by the many who have come and gone before them. They strive to do their best to achieve the annual goals, objectives and targets set for them by management. Accolades go to those who follow best practice and achieve the targets. Performance improvement plans await those that don’t.
They may work on teams but the “me” generation is firmly entrenched and reinforced by individualized performance management, reward and recognition. Everyone is a team player until it conflicts with their personal performance and development plans.
They’re asked on an annual basis for feedback and opinions. This is then followed by a litany of mandated action planning sessions scheduled and facilitated by management to mitigate the same issues every year.
Career pathing consists of vertical career ladders ascending standard job families. Success at each job secures another rung on the ladder getting one closer to the top of the ladder.
So much is mapped out and done for them that they just simply need to execute. Thinking becomes optional and atrophies – just follow the process. A sense of learned helplessness settles in like a thick fog. It’s no wonder everyone looks forward to the weekend.

The modus operandi for employees is Individual and Follower

Now, look beyond your walls, out the window, beyond the skyscrapers – what do you see? Possibilities to change the current state narratives?

For management, it could mean… 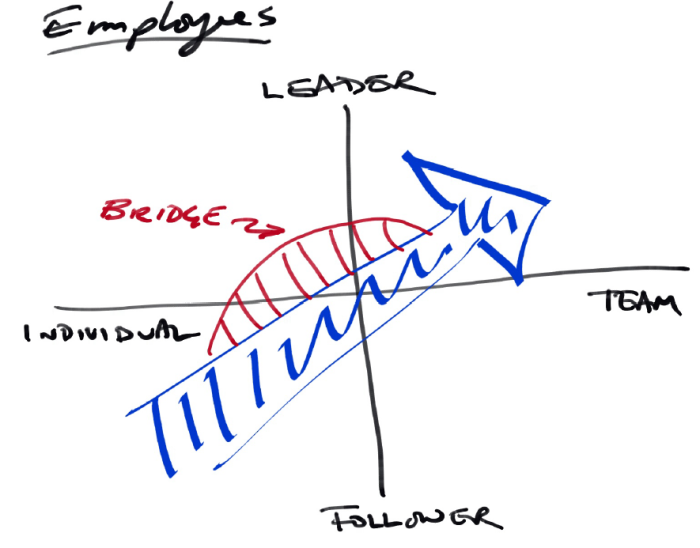 For employees, it could mean…

How can we start bridging the gaps between current and future state?

What if people fall off while crossing the bridge from the lower left to the upper right quadrants? Or like the game of Snakes and Ladders, there will be times people move ahead on the bridge and other times when they will fall back. What lifelines or safety nets exist when they fall off or fall back?
My daughter Lindsey loved sleeping in her mother’s arms when she was little. As soon as my wife put her down in the crib, she would wake and cry. Solution? My wife made Lindsey a security blanket fashioned from one of her nightgowns. Lindsey could smell the scent of her mother on her security blanket and slept with it in her crib. So even though she wasn’t in her mother’s arms, she could fall asleep with the scent of her mother. We never washed her security blanket for the longest time!
The security blanket served as a “transitional object” to ease the change from mother to crib. Likewise, transitional objects will be needed to ease the journey from the lower left to the upper right quadrants. For management, transitional objects could be monthly status reports. For employees, transitional objects could be seeking approval from their manager for a decision they plan to make.
My daughter eventually outgrew the need for her security blanket. I hope the same can be said for organizational security blankets. In the meantime, whatever helps you get through the night or across the bridge – it’s alright, it’s alright.