One of my childhood heroes was Bruce Lee. I’ve seen every one of his movies, most of his Green Hornet appearances as Kato and even a few biopics about his life and tragic end. My brother and our friends practiced and played with wooden nunchaku. All the twirling and whirling with those nunchuks mesmerized spectators. That is, until the moment one of us would inevitably lose control and strike ourselves or each other with them. We all wanted to be like Bruce in “Return of the Dragon”, single-handedly fighting off a gang of thugs with his nunchuks in some back alley in Rome.

My fascination with the martial arts continued in my late twenties when I started attending Karate classes. It wasn’t just the physical activity that appealed to me. Thanks to a great sensei, I loved learning about the history and philosophy of Karate from its roots in Okinawa and Japan to its modern day popularity around the world. One of my favorite books remains “A Book of Five Rings” by Miyamoto Musashi, a 16th century Samurai. I eventually attained my 1st degree (shodan) black belt in Shito-ryu Karate.

When I discovered Agile ways of working and its related growth mindset, I started to see parallels between the martial arts and the Agile mindset. I knew Agile and especially Scrum and Kanban were heavily based on the Japanese Lean Thinking that evolved from the Toyota Production System (TPS). My martial arts background and specifically Karate elevated my understanding to the next level. Here are some basic aspects of Karate and how I think they relate with Agile. 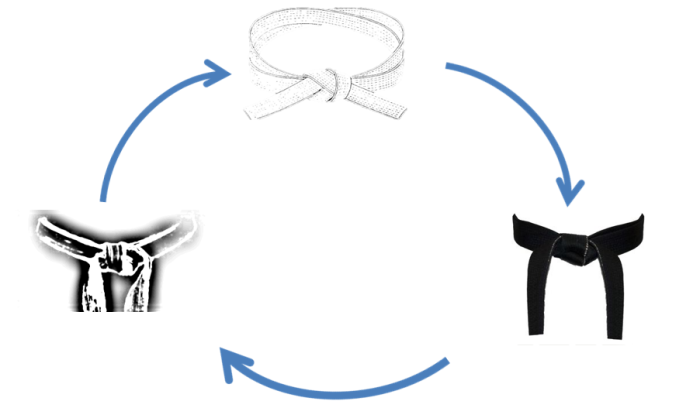 2 thoughts on “Bruce Lee and Agile”