“The single biggest problem in communication is the illusion that it has taken place.”

Have you ever felt like the universe was trying to tell you something? No matter which way you turned or what you did, you kept getting the same message everywhere? That’s how I arrived at the topic for this blog post.

It all started with a colleague of mine sharing his experience over the weekend attending a virtual conference called The Remote Forever Summit 2018. A free, on-line conference dedicated to sharing experiences and knowledge to improve remote working environments in distributed teams and in organizations. The organizer of the annual conference, Malood Noori had hoped to get at least 100 people interested in participating when she floated the idea 2 years ago. You can imagine her surprise when over 2,000 people signed up and several Agile luminaries jumped at the chance to speak and share. Sounds like she had uncovered an untapped need. Highlights included live interactive sessions and a virtual open space.

Then another colleague pointed me to a great InfoQ article How to Communicate Better in Distributed Teams. A holistic treatment of the cultural and communication challenges facing distributed teams. Shared practices included:

On the same day, someone on LinkedIn reached out to me with a request for training. She was looking for a Communications Specialist to help improve communications between teams in the US and India.

Later that week, a team I’m helping coach needed to run their sprint review and retrospective in a distributed manner. Over half the team needed to work remotely due to a snow storm. Thanks to a very creative ScrumMaster and some great technology, it was one of the most fun and memorable events we’ve had as a team. Activities included:

Finally, as I was checking out my favourite Agile podcasts what should I find but an Agile Uprising interview with Malood Noori, founder of the Remote Forever Summit conference! I had come full circle. She shared a couple of remote-working myths.

VersionOne’s State of Agile Report includes a question that tracks the percentage of respondents having at least some distributed teams practicing Agile. The percentage was 35% in 2012, more than doubled in 2013 to 76% and grew annually to 86% in 2016 before falling to 79% in 2017.

Based on that percentage and what I learned from recent events, you would think we should just accept and rally around distributed teams and remote working as the new norm. Our knowledge of and tools for remote working have never been better.

Unlike millennial technology natives, my baby-boomer era tendencies hold me back from wholeheartedly endorsing this remote working trend. Just because we can, doesn’t mean we should. Just because tools exist, doesn’t mean we need to use them. Newly formed teams can especially benefit from lo-tech interactions that accelerate team gelling. This includes face-to-face communications and physical visual management boards. Remote-enabling time-boxed Agile ceremonies is one thing. Virtualizing and replicating the casual, happenstance interactions that spark debate, meaning and new ideas is quite another.

And what about non-verbal cues?

Studies by UCLA’s Professor Mehrabian concluded that only 7% of communication is verbal and 93% is non-verbal made up of 55% body language and 38% tone of voice. These non-verbal subtleties would be almost impossible to pick up over an audio call and difficult to discern over a video call.

The following graphs illustrate there’s no substitute for the richness of good old-fashioned face-to-face communications. The closer people are to each other, the more likelihood they will communicate with each other. Too far apart and communication stops altogether. 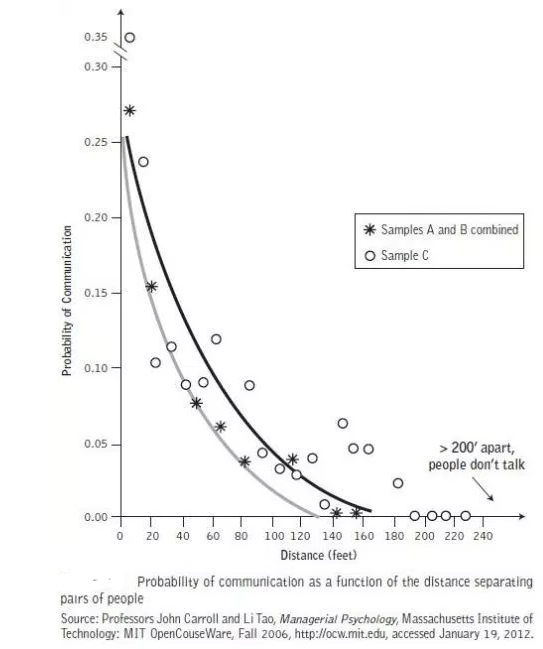 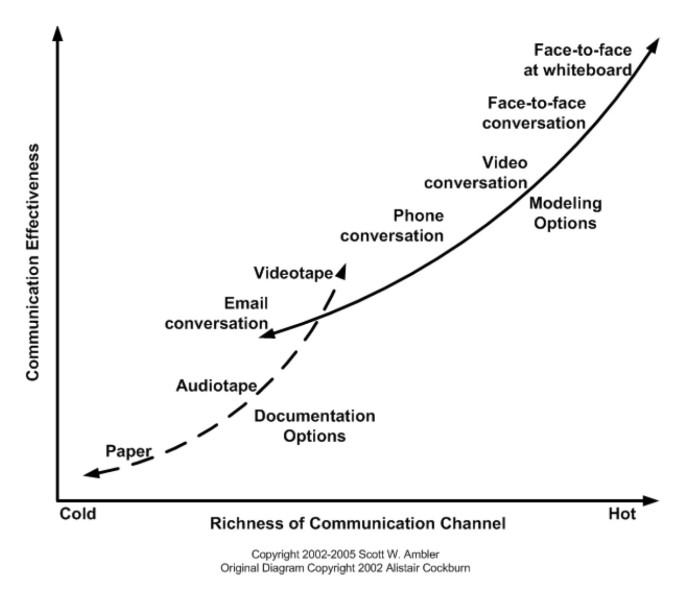 Two of my favourite technology disruptors realized the value of face-to-face communication.

Steve Jobs was a strong believer in face-to-face meetings. That fierce belief permeated the design of his new Pixar headquarters in California. The design featured a central atrium that promoted random encounters and unplanned collaborations.

“Elon is changing the way aerospace business is done… He’s just taken the best things from the tech industry like the open-floor office plans and having everyone talking and all this human interaction. It’s a very different way to most of the aerospace industry, which is designed to produce requirements documents and project reviews.”

When Elon Musk built his SpaceX facility in El Segundo, he had desks interspersed around the factory so that Ivy League computer scientists and engineers designing the machines could sit with the welders and machinists building the hardware. This was SpaceX’s first major break with traditional aerospace companies that prefer to cordon different engineering groups off from each other and typically separate engineers and machinists by thousands of miles to benefit from cheap real estate and labor.

It’s great to see all the technology advances and interest in enabling remote working environments. It’ll certainly help for those situations where we have no choice.

Thank goodness, we always have a choice. Nothing beats a ‘real’ pat on the back from a team mate.

One thought on “Virtualizing Communications?”